These four factors determine how fast you go 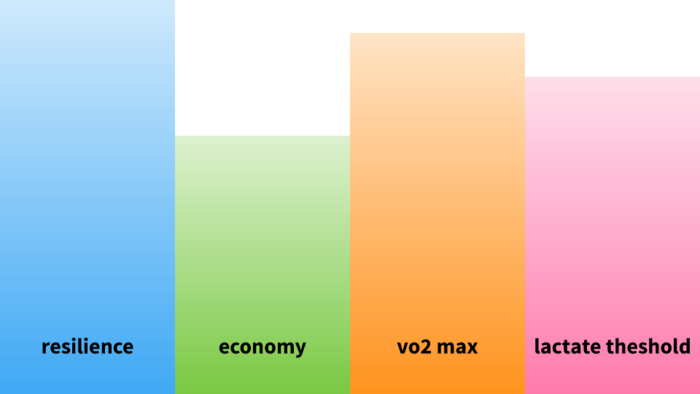 When it comes to running speed (or swimming speed, or cycling speed to an extent), four factors determine how fast you can go. In this article, we will break them down and see how we can improve each one.

Most dials include three factors that determine how fast you can go. These are vo2 max, lactate threshold and economy. We will discuss each of these below.

Roughly, this is the size of your engine, how long you can run it all full power and how far you can get with a certain amount of power.

We think this model is missing one element, though. We call this resilience. You could call it endurance, or mental strength or anything you like. It is the ability to keep going in the face of an increased desire to stop.

When we are working as hard as we can, the lactic in our blood is making us feel like we should stop. But most people dial it back before the physical limit of their body. It just hurts too much. Resilience is how deep we can go.

Vo2 max is the amount of oxygen you can consume. Values range from 30 for inactive people to 70 for elite cyclists, or even into the 90s for some Olympic cross-country skiers.

The more oxygen you can get into your system, the better because generating energy using oxygen is very sustainable. The technical term for this is aerobic production, as opposed to anaerobic production, which is what we use when sprinting.

The only way to measure this is by wearing an oxygen mask in a lab. Your sports watch may provide you with a very tough estimate.

When we generate energy to power our muscles, we produce a byproduct named lactic acid. At an easy pace, tho is not a problem. Our body can take it out of the bloodstream faster than it is being generated.

However, at a certain point, known as the lactate threshold, we begin to produce lactic acid faster than the body an remove it from the blood. As a result, the amount of lactic begins to build up in the body.

The build-up of lactic happens exponentially. This means that if you are working just over your threshold, it will build up very slowly. But, the harder you work, the faster it will build up at an increasing rate.

Once we pass this tipping point, it is only a matter of time until we have to stop. It makes us feel like we have to stop as it will become increasingly uncomfortable.

The first two factors have described how much power you can output. The third factor, economy, describes how far we can go with that amount of energy.

Compare it to cars: each one has a fuel economy. You put one litre of petrol in and that may allow you to go 10 kilometres, or 20 kilometres, or 30 kilometres. It is the same amount of energy, but three cars will produce three different outcomes.

Humans are the same, and it is down to technique.

If you watch an elite marathon runner, they make it look easy. Their torso remains upright. They do not bounce much. They do not rock from side to side. They glide forward using the minimal amount of energy.

Economy is a cool topic because it is highly trainable (you do not need to be a natural) and there are lots of ways to improve it, such as increasing our balance, coordination and technique.

Swimming is similar to running, except that economy is a much bigger factor. How efficiently you move through the water is the key determinant of your speed.

If you doubt that, try racing a sea bass. That thing is the size of your forearm. You have 100 times the mass and strength of that fish. But watch it smash you in a swim race.

Jokes aside, it is generally accepted that swim technique is by far the best way to improve your swimming. That is why most coaches swim sessions will predominantly focus on technique. Compare this to cycling, which is typically about improving your power output.

Economy can be viewed two ways through the lens of cycling.

From one perspective, economy has minimal impact: it is all about power input. You can pull up on your clip-less pedals or only push down using flats: it makes no difference for endurance rides.

There are small differences, though. If you watch the elites doing a time trial, some are silky smooth, while some are rocking side to side and constantly shuffling around on their saddles. And, as soon as it comes to descending, it is all about technique.

The other perspective would say that aerodynamics are part of economy, and therefore economy is a huge part of cycling. Drag is everything in cycling. Hence why the pro peloton ride on packs and everyone in Ironman races on specialist time trial bikes.

When you get into the aero position on the tri bars, you lose a small amount of power. But it is more than worth it for the aerodynamic gains you get.

We have spent quite a bit of time discussing economy, so let us move on to the fourth factor: resilience.

When we are working hard, we typically face an increasing feeling that we would like to stop. It might be the lactic acid in our blood. Or muscle ache, soreness and blisters. Or hunger and lack of energy, or dehydration. Or, if you are 70 miles into a 100-mile race, maybe even good old-fashioned boredom (if you are lucky!).

Continuing to do something in the face of mounting discomfort is what endurance is all about. It is a limiting factor in human performance.

If you do interval training, you will probably have experienced just how “in your head” it can be. The last 10 seconds should be the hardest, physically. But knowing we only have 10 seconds left often makes us feel good.

In the same way, we may feel like we have nothing left at the end of a run. But, when we see the finish line, we can pick it up to a sprint.

How we react to adversity also affects how fast we can go. Whether we respond to a problem by slowing down or rising to the challenge determines how well we do.

Like economy, resilience is trainable, both by learning to tolerate those feelings and by learning psychological techniques to manage the feelings.

Four factors determine how fast we can go: those are vo2 max, lactate threshold, economy and resilience. All of these are trainable to an extent, but some are more trainable than others.

Therefore, if you want to make the biggest improvement, you want to use specific workouts to target each area. Make sure that you do no ignore any one area, as if you do, that will quickly become the limiting factor in your performance.