Is everything we know about hydration incorrect? 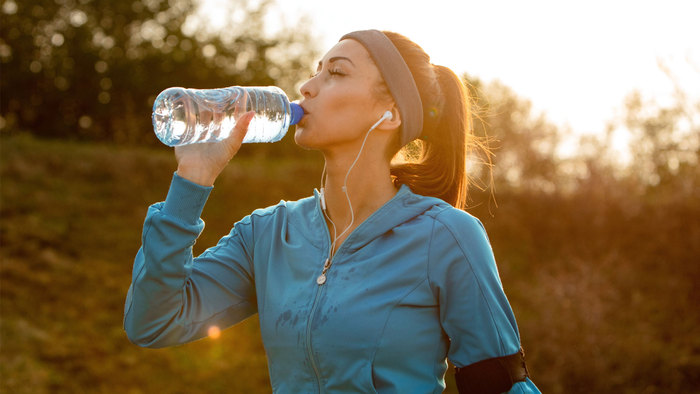 We're told to drink two litres of water per day and, when exercising, replace all of the liquids we lose via sweat. We're warned that anything less than this will cause a dramatic drop in our ability to function. But what if none of this is true?

When I started triathlon, I was warned if that if I lost more than 2% of my body water, I would enter a severe state of dehydration, and my performance would fall off a cliff.

I was instructed to do a sweat test in which I weighed myself before and after a run, while drinking a 500ml bidon, and calculated the difference to see how much fluids I was losing so that I could replace the exact right amount.

At the time, I thought to myself, "I guess this is what the pros do". But there was a problem. This did not match up to my personal experience.

I would regularly go on two-hour runs taking nothing with me. I felt fine. If anything, it was more annoying when I started taking a drink, not just because I had to carry it but also because I now had liquids sloshing around in my stomach and had to slow down.

In 2019, I headed out to ride the Tour de Yorkshire sportive. I packed a bag full of gels and two 500ml bidons filled with a sports drink. I was a cold day, and I was pleased to have layers. My group took 7.5 hours to complete the route.

When I reached the end, I found I still had half a bidon left. In nearly eight hours of cycling, I had drunk 750ml of liquid. And I felt good. Nor did it hit me later, as I raced Tadcaster Triathlon the very next day.

How could I reconcile my experiences with what the science was telling us?

Do you trust your body?

In the book Endure: Mind, Body, and the Curiously Elastic Limits of Human Performance1, Alex Hutchinson may provide the answer. In it, he sums up the evidence for hydration and notes that dehydration and "voluntary dehydration" are different concepts, but that studies rarely treat them as so.

Traditionally, we're taught not to trust our own bodies. "If you wait until you are thirsty, it is already too late" is the phrase I have heard many times. We are told we need to drink proactively, even when we do not want to, to stay on top of our hydration.

But what if the human body is more reliable than we think?

Studies traditionally look at what happens when we deprive people of water and do not let them drink. We make them suffer through thirst until they become dehydrated, and their performance genuinely does fall off a cliff.

But what happens when we let them drink as much as they want? They still lose a lot of water and finish the test dehydrated: but there is no decline in performance. This is what Hutchinson describes as voluntary dehydration.

Under this paradigm, we can put the trust back into our body and drink when we are thirsty, but not bother when we are not.

Show me the evidence

Former marathon world record holder Haile Gebrselassie is an excellent example of this. According to Runner's World, he sweats at 3.6 litres per hour and finishes a marathon 9.8% lighter than when we started (note that this article was also written by Alex Hutchinson).

There are two explanations for this. Either Gebrselassie could run a lot faster marathon than 2:03:59, or his performance does not fall off a cliff when he loses more than 2%. Surely the latter seems more plausible?

The drink-to-thirst concept has backing in research, too. A 2018 study published by Sports Medicine suggested planned drinking should be reserved for hot races and those over 90 minutes, while everything else was best done on thirst2. A 2019 study also indicated that drinking to thirst was a good strategy for ultramarathon running, too3.

Not everyone agrees, though. Another study, also published by Sports Medicine, this time in 2019, specifically looked at the methodological issues with previous research in not differentiating between thirst and dehydration4. The authors concluded that even when controlling for this, a 2% drop in weight still resulted in a decline in cycling performance.

Drinking too much is also a thing

One thing research does agree on is that your intake should not exceed your fluid loss. Drinking too much can lead to hyponatremia5, a condition where an abundance of water and lack of sodium causes a dangerous process of osmosis.

This is not something you need to worry about in everyday life. But, when pushing your body's limits, such as marathon running (or taking controlled substances such as hallucinogens, should that be your thing), you can literally wash the sodium out of your body. Sports drinks containing electrolytes can help prevent this.

Recent research has challenged the long-held belief that we need to drink a minimum amount in our day-to-day lives and replenish all of our liquids while exercising. Measuring the world's top athletes lends some support to this, too.

It is not that hydration is not important. It is that it is not as much of an emergency as we think it is.

It is worth noting that the International Society of Sports Nutrition, who updated their guidelines in 20196, concluded that:

"Drinking-to-thirst is an acknowledged means of maintaining hydration during short-duration exercise (<90 min), when environmental conditions are cool, and/or when exercise intensity is low (e.g., < 60% V̇O2max). However, given that most athletes choose to consume electrolyte formulas by ingesting fluids, drinking-to-thirst may result in the under-consumption of sodium and other vital electrolytes. Moreover, finishers tend to consume fluid at a greater rate than non-finishers. Runners contesting ultra-marathon should aim to consume 150–250 mL of fluid approximately every 20 min during exercise, but fluid intake should be adjusted pending environmental conditions, race duration, work rate, body mass, the degree of fluid tolerance, and prior gut training.

They also still recommend doing a sweat test to calculate the ideal amount of fluid.

So, how do we make sense of it?

Firstly, drinking-to-thirst seems like a perfectly adequate solution for everyday life. There is no need to pressure ourselves to drink eight glasses of water every day. But nor is it harmful: feel free to drink as much as you would like.

When exercising, the picture is a little less clear. Fluid intake should certainly not exceed fluid loss. But whether we need to "keep up" with the fluid loss is less obvious.

For shorter races and cooler conditions, drinking to thirst seems to be an adequate solution. For me, this is likely to be my go-to strategy for most races, with a more planned approach for Ironman.

If you are looking to set a race-winning or qualifying time, there is still value in doing a sweat test and creating an individualised schedule. But this needs to be adjusted for weather conditions and race intensity, so is no small undertaking.

Overall, maybe it is time to put a little more trust in our bodies and their ability to tell us what they need.