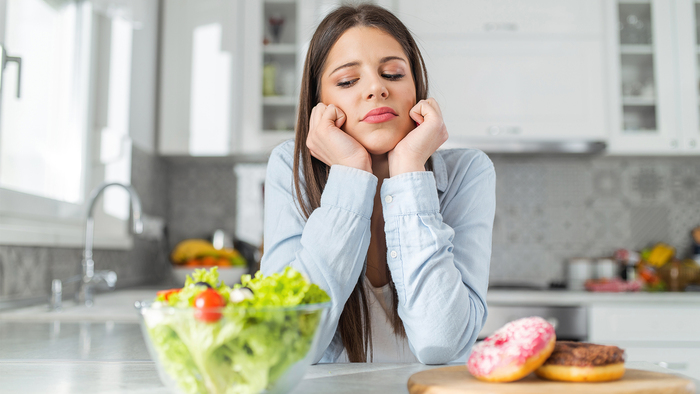 Most of us experience food cravings from time to time. In the West, this is typically for high-fat high-sugar foods such as chocolate, baked goods, sweets and pizza.

Mental imagery, the sights, smells and tastes in our mind, has a large part of play in this. But how are they connected and what can we do about it?

There are many causes of cravings. Our mood and stress level, for example. Simply being hungry is another: some research suggests that the hungrier we get, the more likely we are to crave certain foods.

Therefore, one way to reduce cravings is to reduce our stress levels. Of course, there is rarely a magic bullet for this. Many of us find ourselves in stressful situations at work, at home, or basically anywhere in the modern world.

Or we could attempt to satisfy the cravings by eating something else. A healthier option, such as fruit, perhaps. This will reduce our hunger but will not eliminate the craving entirely. Consider a restaurant, for example. Most of us are usually full after the main course and yet decide to get the chocolate-based dessert nonetheless.

What is mental imagery

Mental imagery, also known as visualisation, is the pictures and sensations we have inside our mind. It is not limited to sights, but can also include imagined sounds, tastes and smells.

What is the role of mental imagery?

There is a strong connection between the mental imagery and eating food we crave1.

Therefore, one thing we can do to reduce cravings is to disrupt the mental imagery.

For example, we can purposefully imagine2 something else: imaging a lovely rainbow3, perhaps, or even playing Tetris4 can help fill our mind with different imagery.

These inventions are effective at the time5, but it should be noted that they do not reduce cravings in the long-term; they simply help us deal with them in the moment.

We can do similar things to our other senses. For example, smelling something else. One study has people smell an unfamiliar neutral odour, menthyl acetate, to see if it reduced their cravings. It worked, but then who has menthyl acetate lying around at home? Nobody, and if we did, it would not be an unfamiliar odour. Whether this will translate into more usable advice is yet to be proved.

The upside to mental imagery

So far, I have painted a bleak picture of mental imagery: the better we can imagine our cravings, the harder they are to resist.

But that may not be the case.

Once we start eating the food, our craving typically subsides. But what if we merely imagined eating the food? Researchers at menthyl acetate did just that: they had participants repeatedly imagine they were eating cheese before seeing how much cheese they actually consumed.

The results showed that participants who had repeatedly imagined eating the cheese ate less cheese than those in the control group6.

Therefore, if you decide to satisfy your craving, rather than avoiding mental imagery, you may want to try imagining consuming the food several times before starting to eat.

Hunger is only one factor that drives appetite. Other factors include mood, boredom and cravings. In the latter, mental imagery has a large role to play.

Therefore, we can help address these cravings by disrupting this mental imagery (having our mind focus on something else), or by attempting to satisfy the craving by repeatedly imagining eating the food we desire.