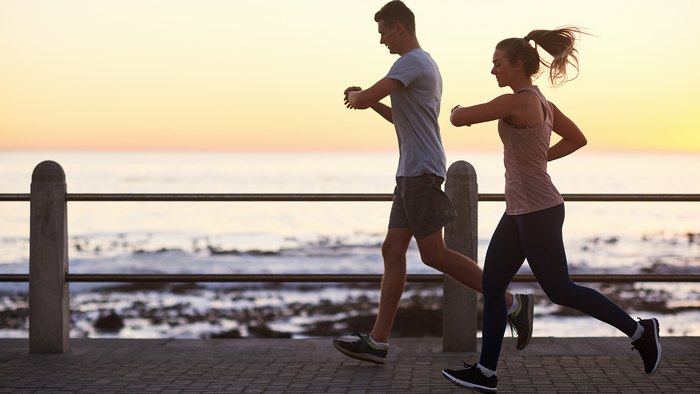 Originally developed by Swedish athletics coaches in the early 20th Century, the word ‘Fartlek’ literally translates to ‘speed play’. Using this method of training, Swedish runners became some of the best in the world, such as Günder Hagg who was nearly unbeatable throughout the ‘40s when he set 10 world records.

This method of training is about running at a variety of paces/efforts for a set time or distance. It develops endurance and speed, training the body to cope with running at fast paces whilst fatigued.

This style of workout comes into its own when time is short, as you can plan exactly how long the session will take. Not only this, but Fartlek is a very efficient use of time when running, particularly when training for triathlon where a schedule needs to also fit cycle and swim sessions.

Another benefit is that Fartlek training can be done anywhere; you don’t need to go to a running track or find a flat road lap, just run your regular running loops. By doing this, it varies the terrain, sometimes uphill, sometimes downhill, further aiding in variety.

Here are five Fartlek sessions that you can incorporate into your next training cycle:

Purpose: Starting at a tempo pace for the 10:00 section, gradually increase the effort/speed as each effort goes by. If done correctly, the 2:00 effort at the end should be pretty fast. By design, this should be continuous meaning you don’t stop after each effort but slow down for the 2:00 easy sections and recover whilst still running.

Purpose: This session incorporates an ‘up and down’ kind of feeling, where you’ll surge and slow repeatedly. The 2:00 reps are designed to be testing but manageable, followed by 30-second intervals where you have to focus on running economy and speed. A great way of simulating changing paces over the course of a run. Repeat this 6 times or more, depending on the target distance. Recoveries again are easy running/jogging. The short 30-second recovery sections will go by very quickly, so it’s important not to run them too fast early on.

One minute hard, one minute easy.

Purpose: This should be a staple for any training schedule whether targeting triathlon or sprinting, it’s so versatile. Perhaps this is the most simple of all the sessions listed, but that’s what makes it so effective and adaptable. The short efforts and recoveries mean you’re constantly having to change pace, meaning you’re training running form as well as your physiological systems. Repeat as many times as desired for a set time.

Alternatives: run fewer efforts, but the hard sections are at sprint pace and the easy sections are light jogging or even walking between. Or for a more endurance focus, try running the recovery sections a little slower than tempo pace and the faster efforts just faster.

Purpose: A good mix of sustained efforts and some faster aerobic work. Not only does this test your body, but it will help test your mind too. As the efforts get longer, it is important to remain controlled and focused in order to prevent going too fast too early, which can make the longer efforts more difficult. This is a good simulator of a race, where perhaps you have to start faster in order to close a gap, before easing back slightly in the middle and then finishing hard.

Alternatives: Keep the ‘pyramid’ principle of increasing and decreasing time, but make the efforts different lengths such as 2:00, 5:00, 8:00, and down.

Purpose: A session such as this would be most beneficial for longer races given the amount of time on your feet and the slower nature of the effort. The critical part of this is not starting too fast for the tempo section and keeping moving. Maintaining your running form is important for the final part of the run too as you’re likely going to be tired if you’ve done this right!

Alternatives: Throw in some 1:00 hard/easy (like described above) after the tempo section to train your form at higher-intensities and speeds.

These five sessions provide a good base of Fartlek principles to build into training cycles. Each one is very simple in principle and can be beneficial whether you are a complete beginner or a world-class athlete. Changing paces constantly will also allow you to feel more in control of your running, critical in smart pacing strategies and ultimately beneficial in races too!