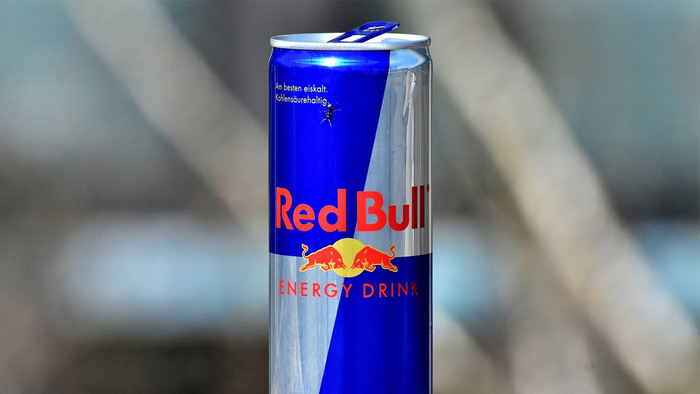 Red Bull spend a huge amount of money to pair themselves as athletes. They sponsor two Formula One teams, multiple football teams and sponsor a range of athletes including triathlete Lucy Charles-Barclay and Brandon Currie. But do athletes actually drink it?

Every time an ad for Bed Bull pops up in my Facebook news feed, it is filled with people commenting "no athlete would ever actually drink your drinks!" In this article, I will explore whether that is the case.

The TL;DR is that athletes probably do drink Red Bull. But another good question is "should they?" I will explore all of this below.

What is Red Bull?

You are probably aware of Red Bull as a brand and as a drink. But what is in the stuff?

The main ingredient is water. Followed by sucrose, glucose, citric acid, and also includes taurine and caffeine. Let's break each of these down.

Water is good. Then we have sucrose and glucose. Sucrose is table sugar: it's made of one glucose and one fructose molecule. If you use energy gels, you may know they are typically made of a 2:1 ratio of glucose to fructose.

Caffeine is there because it is a stimulant.

Taurine is not a stimulant, but it does sound like one, and there is no other solid evidence for including it in an energy drink.

Essentially, Red Bull is a sugary fruit-flavoured drink with caffeine in it.

Is that good for athletes?

When we are racing, we want as little stress on the digestive system as possible. However, sucrose is a good source of energy and essentially the same as in our gels and sports drinks.

Caffeine is proven to improve endurance over anywhere from five minutes to two and a half hours. To get the most benefit you should consume 3-6 mg/kg of bodyweight1. So, if you are 70 kilograms, you should drink around 350 mg an hour before racing.

Red Bull contains 30 mg per 100 ml, which is less than a typical cup of coffee. A can of Red Bull is 250 ml, meaning there is around 75 mg of caffeine, so you can safely consume quite a few cans.

Another comment I see a lot is that athletes wouldn't put "all of those chemicals" in their body.

There is a lot of anti-science around these days so just to recap, everything in the universe is made of chemicals. Coronavirus and arsenic are both natural, so just because something is natural does not make it good.

But, as discussed, there isn't much weird in Red Bull. it is just a fruit drink with caffeine.

Taurine may raise an eyebrow, but it is worth noting that the human body produces its own taurine, as well as taking on some via food if you eat animal products. A 250 ml can of Red Bull contains 1 g of taurine and a supplement dose of 3-6 grams appears to be safe2.

While we are talking about science, let us be clear that sugar provides energy (all food does). Calories are a measure of energy. Caffeine does not provide energy, but rather it is a stimulant: it makes the body feel more alert. We often use the term "energy drink" snd think of caffeine, but a sugar-free energy drink contains virtually no energy.

But energy drinks are bad!

It is true that energy drinks appear to have a negative effect on public health. These come from too problematic areas: sugar and caffeine.

Sugar is a problem for two reasons. One is that it contains a lot of calories. The second is that it has a high glycemic index: it is quick-release energy so we get hungry again sooner compared to complex carbohydrates. All of this conspires to people consuming too many calories.

But this is not a problem for athletes who are managing their caloric intake. Broadly, energy is energy and if you are burning all of the calories you are taking in then happy days.

So, energy drinks are good?

Like most things in life, it comes down to moderation. One of the big problems with energy drinks is that people buy the large cans and drink several of them (which amounts to litres) per day. Sometimes while doing little exercise.

But a couple of cans of Red Bull per day should not have any adverse effects, as long as you are burning those calories off.

Indeed, it could be a good way to get energy and caffeine into your body if you are racing. If you want to use them, feel free.

Do professional athletes use them?

I think so, for two reasons.

One is that, as discussed, there is no reason not to use them. They have energy and caffeine, both of which are good things to take for endurance sports.

Second is that Red Bull almost certainly pay them a large amount of money. And athletes make most of their money via sponsorship.

If you are a professional triathlete competing in the World Triathlon Series, the 2019 prize pool offered $18,000 to the winner of each race but just $1,600 if you finished outside of the top ten. If you race eight per year, and you came 15th in each race, you would earn $8,800 per year and this is the highest level of triathlon. Not much of a living.

Of course, they could simply take the money, do the Instagram pictures with the cans of Red Bull and never touch the stuff. But given how dependent athletes are on sponsorship, and that energy drinks are a good option for athletes who manage their diets, this seems unlikely.

Now we have dealt with the problem factually, I thought I would chip in my personal experience.

I particularly like energy drinks towards the end of Ironman and I suspect a lot of other athletes can relate to that. I try to get half way through the marathon and then I start smashing Red Bull or Coke into my body to see me through to the end.

Once you have been on the course for 10-12 hours already, and still have a half marathon to do, it tastes amazing.

I also sometimes do a caffeine gel before shorter races but you could also use an energy drink here, too.

Professional athletes that are sponsored by Red Bull probably do use the product.

Energy drinks are not inherently bad: we do need energy and caffeine does improve endurance. They only become a problem when consumed in excess. No other ingredients in Red Bull pose a problem for our health.